Tormented souls is a horror adventure game set in an abandoned hospital with many puzzles to solve as well as monsters to shoot or avoid, heavily inspired with retro classics such as the resident evil and silent hill series of games you can see the inspiration both in the gameplay style, as well as in the music and aesthetics of the game itself.

While this is inspired by the retro classics there are a number of differences to be aware of, as while the static camera’s remain this isn’t true tank controls as changing between camera’s will change the relative direction your controller works and can often cause some issues in looping back and forth between camera’s, also the map is a lot less user friendly in this game as you have to actually find where you are on the map and try and make your way around from there.

That being said some of the things that this game does differently it does do well, as many of the puzzles are quite obscure and while this will make some rather difficult as you have to work out what it is getting at this is quite a clever way of doing puzzles as opposed to the solution just being handed to you on a piece of paper on the other end of the buidling. More often than not if you’re stuck the solution will be in the room somewhere, even if it’s on paintings and you have to work out how certain elements and the things you have at hand work together to solve the puzzle before you

You begin in your apartment with a mysterious photo of twins sending you to this hospital where you’re kidnapped and wake up stranded in this horror landscape just trying to find your way out, and as you make your way through the game you will discover more about the history of yourself and this hospital and how all of this ties together along with how you and the twins have any significance together.

I do like the storyline and the narrative path of the game as you discover what has occurred in this hospital and there’s definitely a big theme of insanity spreading throughout especially as the horrific monsters around you and new powers you discover to enter alternate realms (much like silent hill’s otherworld) and this does allow the game to perhaps get away with some things which I can’t tell if were intentional insanity elements or just flaws such as where some of the lore texts you find will either have more text in the spanish native words rather than the translated texts, or sometimes the translation clicking on them will have more text, also dates will be inconsistent with the lore and the photo, and sometimes even you’ll have duplicated pages in the book rather than finding anything new (though the lore text clicking on it will have new information) And while this might be unintentional it does work out well with the theme of the game so it would be very clever if it was intentional.

Combat in this game however can be a little problematic if you’re use to playing the classic titles like silent hill and resident evil, because while they added the quality of life quick turn around moves and the quick dodge back which if essential for the melee combat this game does essentially stack animations so you have to pretty much know the timing of attacks because you can’t just melee until you see the attack starting then dodge back, which you could in classic titles and this will cause you to get hit more often than you would be expecting, and then many of the enemies have a long distance attack which homes in on you and is very difficult to dodge.

Although these are minor gripes for someone who is use to the classics the game itself is still fun, and as long as you adapt to using your projectile weapons (and perhaps only using the melee when they’re downed) you can avoid getting salty over the melee combat feel not being as good as in classic titles. Enemies you eliminate will persist also, so you won’t have to worry about them once they’re out of the picture, and there will be plenty of ammo for all your weapons to essentially eliminate everything in the game without worry if you explore enough too so being precious with your inventory is not necessary at all unlike some of the classic titles where you would have to save up for bosses or pick your enemies well to not run out of ammunition.

While there are some area’s where you will have to take down certain enemies these aren’t really boss battles as there aren’t that many enemy varieties in the game and these will be found more and more commonly as you progress through the game, the only real problem you could have is if you try to take down a certain flying enemy who literally cannot die, but once you’re aware of this and the triggers to be aware of you know to run and leave.

I enjoyed the experience of the game, and while some puzzles were very obscure and sometimes I don’t know where the solution came from, especially with the floppy disk rewrite, others for the most part were enjoyable to solve and did leave you feeling clever for being able to beat the abstract nature of the puzzle. The storyline was also enjoyable and learning more about the history through the lore discovered was better than often some of the random notes you could find in classic titles.

While there were alternative endings available in this game I was a little disappointed that they didn’t really go down the route of the classic games where for example in the silent hill series if you did things differently the final boss would be a different form of the same boss with different attacks and patterns and even looking different, which was a fun and clever change even if it was minor, whereas the final boss in this would remain the same regardless of the decision you made, when the lore could clearly do something different which would have borne a different final boss to take down and this would have been a nice touch.

The visuals in the game are very beautiful and the lighting elements are well done, and the area’s in the game with the angles are good at drawing you in and keeping you on edge at the same time, and I do think they did a great job at setting the location well, and while the map is pretty small this does avoid too much awkward backtracking by unlocking faster path’s through to where you need to go as you make progress before eventually opening you up to new area’s beyond the hospital even if these are essentially just path’s to the final area.

I would have liked some more secrets in the game but can understand why they didn’t, but there were some moments that clearly could have had some secret endings put in, and this will be spoilers from here so if you don’t want to see go buy the game and play for yourselves, but when you’ve got the antidote and you first return to yourself in the past where you’ve just been kidnapped and injected with the blood which causes you to hallucinate everything, and this is signposted by the fact that the hospital is clean and not haunted at that point despite the monster on the chair which the blood was extracted from, it would have been clever if instead of taking your eye you could’ve injected your past self with the cure and cause a different reality to exist preventing all of this occurring; also in the “you shouldnt’ve come here” room there were alternative doors which seem to lead somewhere and perhaps returning late game you could unlock these to go deeper into the insanity, and a final thing is there’s a door which states when you return to your “bedroom” you have to learn more before you can open, but despite learning everything and knowing everything you couldn’t enter so I don’t understand this unless it required every piece of lore on the game to enter, and after defeating the boss this path is closed off to you, but could have been clever if instead of trying to leave the hospital you went to this room and entered that door for a special ending.

All this being said the game was still fun and enjoyable, and even though there’s a “run” button which literally does nothing when it would be essential in a game like this to be able to run, or at least perform some sort of dodge, if you just accept the game as it is flaws and all it’s still fun and worth playing through, and it did take me 10 hours to complete which does seem on the slow side but I did explore for most things and try to find everything and I don’t know how I missed some pages of lore here and there having looted every corner of most rooms. The game was clever with how it gated off area’s without just simply requiring keys, and the pace to discover new ways to enter new area’s and then find new things in those area’s was done pretty well. It would have been nice to have some more mid way bosses, and alternative final boss varieties but for a first venture they did pretty well, I’m sure they’ll continue to make more titles of this nature and perhaps sequels to this though I’m unsure how they could do this other than different twins in different places, as most of this revolved around twins rather than the town itself like silent hill which allowed that franchise much more room for sequels. 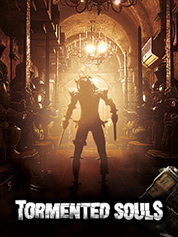 Get tormented souls for youself now at https://greenmangaming.sjv.io/c/3277581/1267032/15105?prodsku=Tormented%20Souls%20-%20PC&u=https%3A%2F%2Fwww.greenmangaming.com%2Fgames%2Ftormented-souls-pc%2F&intsrc=PUI2_9598 Also available on steam now at Tormented Souls on Steam (steampowered.com)