Potential spoilers as reviewing this episode would be next to impossible to review without talking about issues and themes which reveal what happens in the episode, so if you wish to avoid spoilers watch and read no further.

Episode 2 of life is strange deals with some hard hitting plot lines dealing with issues from depression, rape and drugs to gaslighting and suicide throughout. The main plotline of this particular episode is kate marsh and how you have dealt with her in the past and throughout the current episode and the problems she has been going through with the release of a viral video, we soon discover that this isn’t illicitly filmed footage of her in her room with a boyfriend but instead out at a vortex club party where she has been drugged by nathan prescott. Of course proving this and simply knowing are two different matters which will pan out diffferently depending on the choices you have made throughout the playthrough as perhaps directly blaming nathan and confronting him on every instance could cause him to destroy any evidence you may have been able to find, whilst supporting kate and keeping things on the lowdown may be more likely to cause him to slip up in the future.

Divergent paths can be seen to begin as to whether you get a party invite finalised on the list, whether you choose to go on a date with warren or avoid him entirely, and also whether you actually suceed in saving kate marsh from the rooftop or not, and also who you ultimately blame in the final scene all have consequences, with mr jefferson losing priveledges if you blame him, perhaps the security guard losing his job or being put on repromand if you blame him and nathan getting suspended regardless of blame for simply being involved in the party.

The game begins to develop some new gameplay mechanics also, pointing out that noticing the little things which have cause and effect and also memorising the little details might be something immensely useful in future episodes, especially as you learn that you have a very limited time travel potential, not only the the ammount you can go backwards in time, but also that max’s health deteriorates if you use it too often, so perhaps adding a limited time travel potential per room which could cause the instances of missing possibilities for change even more likely in future episodes.

The ultimate reveal of the episode however is that max can also freeze time, or slow it down to such a degree that effectively time stops, whilst being very draining on her abilities and removing any ability to use them in the future this could become an essential mechanic later.

Regardless of how you have treated kate to this date she will end up on the roof, simply because mr jefferson gaslit her to end up there by being accused of making things up for attention and blowing everything out of proportion, this can be hard hitting if you’ve put everything into caring for kate but also reveals potential further involvement from mr jefferson, which I am happy to say isn’t highlighted to be something to rewind when they have a confrontation outside of the classroom and simply remaining as something you can learn if you utilise your ability to manipulate time correctly.

It would also appear that the security guard is simply misguided and overreacting in a protective manner to his daughter over the majority of instances as opposed to being more directly involved in the dissappearances of the students, and persuing things in an incorrect manner, because as stated he is not cut out to be a cop, and perhaps resents this and hopes to investigate himself without involving others, causing increased danger to the students at blackwell academy as a result where if he had simply handed in evidence to the police things might well have gone different, although the prescotts essentially own the town and may be able to get around police investigations confronting kate and simply gathering evidence rather than acting in her interest also did have some influence on her not being prevented from getting on the rooftop.

Chloe herself seems to be coming accross more unstable owing money to drug dealers and perhaps not being so honest with max as she comes accross, being far more invested in rachel amber than max and being selfish in many instances insisting max perform tricks for her and spend all her time with her instead of others, getting jealous at max taking kate’s call for example, and seeing max as a way to solve all of her own problems rather than simply being her former best friend.

I can see how the plot could be very different in future episodes depending on how you have played through so far, and I would be very dissappointed if they wrote kate out of the game entirely even with a win condition especially considering how much effort some people have put into saving her life and making her feel good about herself, and also that she could be the very key to getting a conviction on nathan and unlocking the whole mystery of rachel ambers dissappearence. I would hope she remains a full character in the game who you can interact with and even bring along on investigations, perhaps storming nathan’s locker or dorm room while everyone else is at a party as an option rather than ending up on a date with warren, or off helping chloe with her drug dealer debts.

Also at the end of the episode the mystery depeends around the flashes forward to inside of the tornado itself and a solar eclipse which could be a metaphore for max’s life light going out and dimming in a future where she may already be dead or on the verge of death having been knocked out by a falling lighthouse, depending how you interpret what has occured in the game to date.

I can’t wait for the next episode to come out, and so far to date this is definately an award winning work in my opinion, and if it doesn’t win an award from a larger institution at least it deserves an IStar, which any readers of my reviews will note I very rarely give out and are only awarded to the most very exceptional works in thier field, and this is something I believe definately deserves such an award.

Life is strange episode 2 is out now on steamstore.steampowered.com/app/319630 be sure to check you’ve unticked and reticked the dlc for episode 2 if you’ve purchased it and it won’t download. 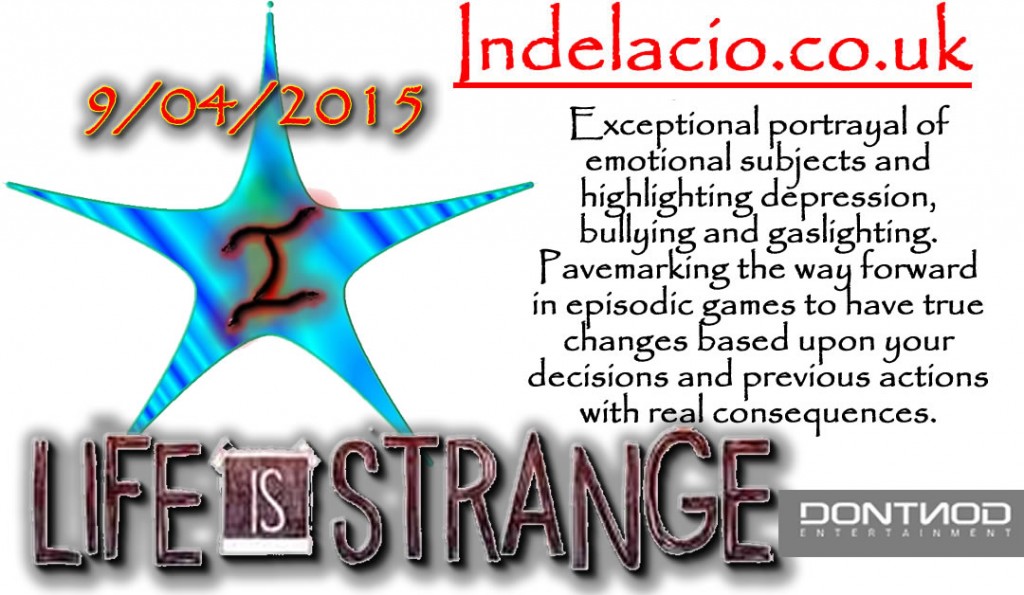